Echoes of Emilee is not merely another vampire novel. Witches, gods, and goddesses join the vampires in this unique and enjoyable tale of love and destiny. The story explores a number of paranormal possibilities, traveling back and forth between distant past and present, weaving an intriguing and entertaining adventure along the way.

Cursed in the thirteenth century to spend his immortal life within a glass box, vampire Carrick McKinley is haunted by the memory of the horrific events that led to his captivity. Emilee, the young woman he loved, met a brutal death before his eyes, and his inability to save her torments him and inspires thoughts of revenge against the descendants of the witch responsible for it all.

Nine centuries later, Carrick’s grieving and planning have led him to Ally Butler, an artist in present-day Ireland and a direct descendent of Mageara, the witch who cursed him. Ally has her own extraordinary mystical powers and the two develop a telepathic rapport that gradually deepens their relationship and causes Carrick to question his plan for vengeance. The reason for their unexpected attraction is an interesting twist, as is the manner in which Mageara returns. The cast of characters expands and before long, past events and future destinies become clearer, even as an encroaching danger looms over them all.

The plot develops clearly, with each story thread branching out to create a new one, introducing characters and situations that both explain and intrigue. In spite of the large number of characters and events depicted, Rochelle keeps the narrative flowing and transitions from one scene to the next are executed well. Connections between the characters prove deeper than first suspected, and multilayered personalities unfold and enrich the storylines. The inclusion of a pair of cats, whose roles turn out to be unique and amusing, is particularly clever and effective.

Echoes of Emilee, the first installment in what appears to be a planned series, is not without errors. Most noticeably, issues with verb agreement and occasional anachronistic dialogue create stumbling blocks in an otherwise absorbing novel. Modern phrases such as “I know where you are coming from,” simply don’t ring true when spoken by a man born in the thirteenth century. Certain aspects of characters would benefit from more description as well. For example, Carrick’s vampire nature isn’t explored much beyond the obligatory need for blood and inability to withstand natural light. Even so, it is likely readers will be so enchanted by the assortment of characters that they will read on, eager to see which direction the tale will take next.

The ending is satisfying and leaves enough threads dangling to inspire readers to pick up the next installment. While the novel would benefit from more meticulous attention to grammar and time-appropriate dialogue, Echoes of Emilee remains a richly layered, inventive, and absorbing story. Rochelle may well be a writer to watch in the paranormal/fantasy genre.

The book is now available! Amazon.com andthrough other main bookstores ONLINE. THANKS for visiting!

Mageara was the head crone of the long-existing Butler clan in Cahir, Ireland. She had cast a curse on Carrick McKinley of the Footfalls in the thirteenth century. Carrick is a vampire waiting for the right person to release him from his curse so he can have his revenge on the last of the Butler clan. The curse bound him from saving Emilee, the one he loved but never changed.

Nine centuries later he has found his way for revenge. The one he desires to kill is the last of the Butler clan that murdered Emilee. He just needs to find a way to escape.

Allyson Joy Butler is the last of the Butler Clan. She has no idea what history she has with the Goddess Conchen.

As Mageara tries to hinder Carrick from tricking Allyson into a release of the Curse of Seclusion, the goddess gets involved.

Fourteen Centuries ago Mageara's greatest ancestor tried to overthrow the Godhead of the ninth heaven. Goddess Conchen has been planning her own revenge for the murder of most of her family.

Paranormal-Fantasy author, Karin-Rochelle, stirs the cauldron of your mind and leaves you spellbound in the mysterious Irish castle on Cahir as you face god, goddess, vampire and crone in this new vampire novel.  Whether you read at dawn or under the moon's omnipresent eye, Karin's metaphysical world mixes fact and fantasy that will have you locked in its spell quicker than you can say the proverbial "I vant to suck your blood".

Echoes of Emilee is not the regular 'witch's brew'.  As you fall into the Echoes Vampire Society, be forewarned: You won't want Karin's last word to be her FINAL word.

Karin-Rochelle has written many magazine and newspaper articles and over 100 lyrics and poems.

She lives in Kentucky with her best friend, her two dogs, Lilly and Gizmo, and three cats: Blackie, Tessoract and Mageara.  She reads paranormal books by Sherylynn Kenyon, Anne Rice and many others.  Karin invites you to take a look at chapter 1 of her book which you can find as a blog entry. 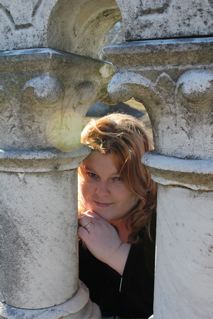